In 2016, the international liner shipping industry transported approximately 130 million containers packed with cargo, with an estimated value of more than $4 trillion. Proper packing, stowage and securing of containers and reporting of correct weight is very important to the safety of a container ship, its crew and its cargo, to shore-based workers and equipment, and to the environment. However, even with proper packing of the cargo into the container, correct container weight declaration, and proper stowage and securing aboard ship, a number of factors ranging from severe weather and rough seas to more catastrophic and rare events like ship groundings, structural failures, and collisions can result in containers being lost at sea.

In the past, obtaining an accurate assessment of how many containers actually are lost at sea was a highly speculative process. For many years, there were widely circulated, but unsupported and grossly inaccurate claims that the industry might lose as many as 10,000 containers a year at sea.

Ocean carriers operating the containerships, which the World Shipping Council (WSC) represents, remain the best sources for accurate information on this subject. 1 Therefore, in an effort to provide greater clarity and a more accurate assessment of the number of containers lost at sea on an annual basis, WSC undertook the first survey of its member companies in 2011, with updates in 2014 and 2017, and has published the results to make the information readily available to all interested parties.

Methodology of the Surveys

In each of the surveys conducted in 2011, 2014 and 2017, the WSC member companies were asked to report the number of containers lost overboard for the preceding three years. For the 2017 report, all WSC member companies responded and together, they represent 80% of the total global vessel container capacity. WSC assumes for the purpose of its analysis that the container losses for the 20% of the industry’s capacity that is operated by carriers that did not participate in the survey would be roughly the same as those of the 80% of the industry that responded.

The total annual figure reported by WSC members is adjusted upward to provide an estimated loss figure for all carriers, both WSC members and non-members, and arrive at a total industry figure. As expected, some carriers lost no containers during the period, while others noted a catastrophic loss, which for the purposes of this analysis is defined as a loss overboard of 50 or more containers in a single incident. Catastrophic losses are rare, but the total number of containers lost in such events represents more than half of all containers lost.

Based on the 2011 survey results, the World Shipping Council estimated that on average there were approximately 350 containers lost at sea each year during the 2008-2010 time frame, not counting catastrophic events. When one counted the catastrophic losses, an average annual total loss per year of approximately 675 containers was estimated for this three year period.

In the 2014 survey, WSC received reports from carriers on losses during 2011, 2012 and 2013. From those results, WSC estimated that there were approximately 733 containers lost at sea on average for each of these three years, not counting catastrophic events. When one includes catastrophic losses (as defined above) during these years, the average annual loss for the period was approximately 2,683 containers.

This larger number in 2014 is due primarily to two factors: the complete loss in 2013 of the MOL Comfort in the Indian Ocean and all of the 4,293 containers on board – which remains the worst containership loss in history; and, in 2011, the grounding and loss of the M/V Rena off New Zealand, which resulted in a loss overboard of roughly 900 containers. Both of these incidents involved complete and total vessel losses.

Analysis of the Nine Year Trends

While containers lost overboard represent about one thousandth of 1% of the roughly 130 million container loads shipped each year, the industry has been actively supporting a number of efforts to enhance container safety that should help reduce the number of containers lost at sea, including:

At any point in time, there are about 6,000 containerships active on the world’s seas and waterways linking continents and communities through trade. The container shipping industry’s goal remains to keep the loss of containers carried on those ships as close to zero as possible. Carriers will continue to explore and implement preventative and realistic measures to achieve that goal.

1 The WSC’s member companies operate 80 percent of the global containership capacity; thus, a survey of their losses should provide a valid estimate of the number of containers lost at sea. More information about WSC and the liner shipping industry can be obtained at: www.worldshipping.org

Hapag-Lloyd's latest update to the recent events that have influenced transportation into and out of Vancouver. 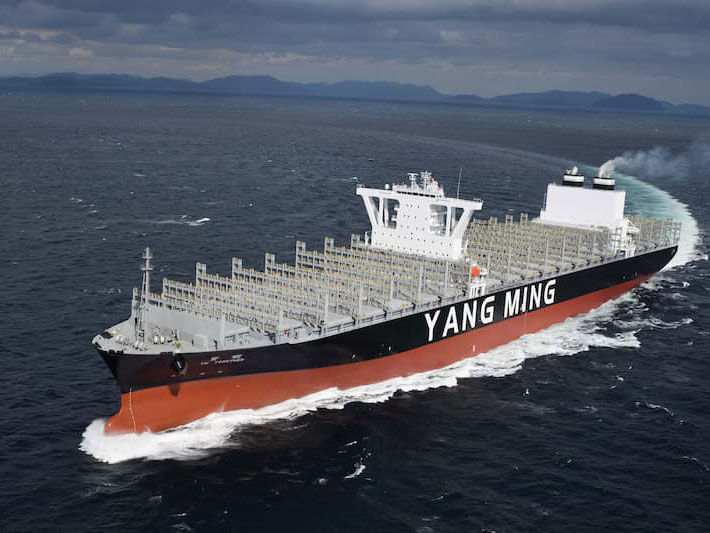 Yang Ming’s Latest Addition of Its 9th 11,000 TEU Ship to the Trans-Pacific Service

MSC Mediterranean Shipping Company has filed and will implement the below GFS (Global Fuel Surcharge) with the following quantum and effective dates for all shipments from Asia to the USA:…

MSC announced the BRQ effective as of January 1st, 2022