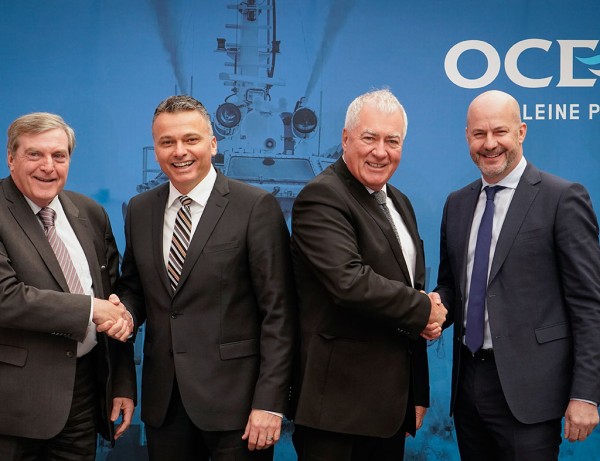 increasing, Ocean Group says it is well positioned to continue expanding in its current markets and well as provides its services abroad. Founded by Gordon Bain in 1972 originally as a fledgling commercial diving operation, the company has some 900 employees and operates primarily in Quebec Ontario, New Brunswick, Alberta and in the Caribbean region.

The substantial investment offers the Ocean Group new leverage to not only expand its Canadian activities but to pursue its global growth and acquire new equipment. In recent years, Ocean Group has notably been expanding its Caribbean presence - as illustrated by an agreement last June with Kingston port authorities in Jamaica.

“Our strong growth in recent years combined with our desire to expand our activities internationally are pushing us to accelerate our development,” said Jacques Tanguay, president and coo of Ocean Group. “ To achieve this, we have joined up with world-class partners, making it possible to take these next steps. With this partnership, we are maintaining our vision of excellence and giving ourselves new leverage to accelerate our growth.”

“This transaction is perfectly aligned with the Caisse’s strategy to support the local growth and international expansion of high-performing Québec companies,” said Mathieu Gauvin, Senior VP at the Caisse. “Through this investment, Ocean Group will accelerate the implementation of its expansion plan, which will eventually allow it to provide its services in new markets.”

“This investment by the Fonds (FTQ) is in line with our desire to support Québec’s flagship companies, protect our head offices and support our maritime sector,” added Jean Wilhelmy, Senior Vice-President, Private Equity, at the Fonds. “Ocean Group shares all these priorities.”