A gleaming new ultramarine blue, 80-ton straddle carrier stands waiting on the factory floor of Combilift’s recently inaugurated complex in County Monaghan, Ireland, near the Northern Ireland border. The machinery, purchased by the crane manufacturer Liebherr, is destined for the southwestern Irish port of Fenit. There, Liebherr stages the export of its massive cranes made in nearby Killarney. The Combilift-made straddle carrier will move and lift sections of the cranes.

That Combilift got the nod from the much larger heavy equipment manufacturer certainly is a feather in the cap of the Irish company. It also highlights a growing business segment for Combilift, known primarily as aforklift maker. Straddle carriers now account for about 10% of the company’s overall business.

The straddle carrier shares size and maneuverability with other Combilift products. Combilift straddle carriers tend to be smaller than most on the market, less expensive and more agile. With a three-wheel design that eliminates the need for suspension, these machines can, for example, operate on just about any surface. “Anywhere a tractor-trailer can drive, you’re fit to drive a Combilift SC,” said Paul Short, the company’s North America president.

The straddle carriers can also tip containers to load and unload bulk cargo, including grain and scrap metal. Another machine on display in the Combilift factory was hoisting a concrete tank, demonstrating the ability to rotate a load from vertical to horizontal.

Combilift originally designed its straddle carrier to lift a single, loaded container, but quickly moved into double-stacking. The company has developed a machine for intermodal work at a cargo train terminal in Holland that can triple stack containers, with a capacity of four-wide. The company also offers a telescoping machine that can travel through a 15-foot doorway, but still double-stack.

combiCombilift straddle carriers range in capacity from 20 tons to 100 tons. Prices start at €100,000 and go all the way to €1 million. According to Short, competing machines cost double.

“There are many straddles on the market for stacking four/five high, but we see an opportunity in the market for a low volume, low-cost straddle for imports/exporters, manufacturers and inland container terminals,” wrote general manager Josh Moffett, in an email.

Combilift first offered a straddle carrier in 2009. According to Moffett, Combilift had been making a side-lifting machine to handle containers, but found that “more and more customers had the demand for a yard-based straddle carrier.”

Currently, Moffett wrote, about half the machines manufactured are for use in moving containers, while the other half handle oversized loads.

One big use, Short said, is to lift containers from chassis and place the containers on the ground, and then load up the chassis with another container. That enables customers to save on chassis rentals, which multiplied by several dozen can mean a cost savings of more than $1,000 a day. He said customers in California and Washington now include hay exporters and wine importers.

In the past, these types of customers might have bought a reach stacker or a top-pick forklift, twice the price of a straddle carrier, and possibly twice the weight as well, Short said. He added: “In a lot of cases where we’re supplying them with a straddle carrier, the ground conditions aren’t good enough, either the concrete isn’t thick enough or the ground is unprepared or unpaved, so a reach stacker or a top pick forklift isn’t going to be fit to work on it.”

Combilift has developed as well a number of straddle carrier attachments designed, Short said, “to attach to a [particular type of] load with very little interaction of the operator.”

These include a rotating fork attachment for automatically lifting pre-staged loads of concrete or steel onto a trailer or zero-swing platforms for stabilizing loads, wrote Moffett.

The Combilift factory inauguration hosted hundreds of customers and dealers. One attendee was Wes Oliver, equipment manager at Athens, Georgia-based RAI, which specializes in industrial fabrication, as well as installation and relocation of industrial manufacturing equipment.

Oliver described how, in 2011, his company was hired by Caterpillar to provide steel for a new facility. He was initially skeptical of the Combilift straddle lift machinery, which were in his company’s yard for demonstration. He remembered thinking, “I don’t know, it’s like witchcraft. You push a button and it goes sideways,” he joked.

Over that weekend, his company needed to move three huge steel beams. “We didn’t think we were going to be able to do it,” he recalled, but the straddle carrier accomplished what existing overhead cranes couldn’t. “I said, ‘I don’t know what they cost, we’re buying them,’” Oliver said. “The demos hit our yard, they never left.” 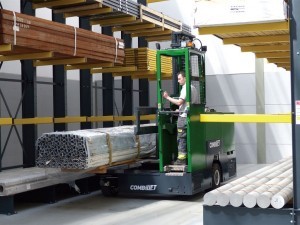