President Donald Trump is facing a last-ditch effort from within his own administration and Republican lawmakers to head off steep tariffs on steel and aluminum that threaten to unleash a global trade war.

White House economic adviser Gary Cohn is summoning executives from U.S. companies that depend on the metals to meet this week with Trump to try to persuade him to blunt or halt the tariffs announced last week, according to two people familiar with the matter.

Republicans in Congress are mounting an unusual public campaign to thwart the tariffs, with House Speaker Paul Ryan’s spokeswoman, AshLee Strong, releasing a statement urging the president to halt the plan, a rare public break between the two GOP leaders.

Trump on Monday stood by his call for a 25 percent tariff on imported steel and 10 percent on aluminum, saying “we’re not backing down.” Yet if he doesn’t retreat, Cohn may quit the administration and some in Congress could try to limit the president’s authority to impose trade penalties.

The split in the Republican ranks on trade is coming to a head as the party struggles to hold a previously safe House seat in a special election in steel country. Trump plans to visit the area on Saturday, a few days before the vote in southwestern Pennsylvania, where recent polls show a Democrat slightly ahead in a district Trump carried by 20 percentage points in 2016.

Tariff supporters are pressing Trump to announce the measures during his visit to mobilize GOP voters, but Cohn is pushing back with the meeting of executives to make the case that trade sanctions will cost American jobs. The White House session with Trump on Thursday will include representatives of breweries, beverage-can manufacturers and automakers, along with the oil industry, said the people, who spoke on condition of anonymity to discuss a policy disagreement.

A Trump order to impose the tariffs would be a huge setback for Cohn, who has vigorously opposed the move, citing concerns that it would hurt the economy. This decision is viewed inside the White House as a possible breaking point for Cohn, a former senior executive at Goldman Sachs Group Inc., and some insiders believe he will depart if Trump doesn’t take his advice on the issue.

Conservative groups, including the Club for Growth, a pro-free market organization, have also cautioned that tariffs would hurt the economy and Republican chances to hold on to both chambers of Congress in this year’s midterm elections.

Harley-Davidson Inc., the motorcycle maker based in Wisconsin, Ryan’s home state, is facing threats of retaliation from Europe over the steel and aluminum tariffs. European Commission President Jean-Claude Juncker said the EU may target imports of the company’s motorcycles as well as Kentucky bourbon and Levi Strauss jeans.

Harley-Davidson already is being hit by a deepening slump in American motorcycle demand, which has spurred job cuts and the closing of a plant in Kansas City, Missouri.

Republicans in Congress are walking a fine line—criticizing the president while offering him a way to back off his position and preserve his ability to say he imposed tough new tariffs. Lawmakers don’t have much time to change his mind. Trump announced his plan last week, and an order could be signed within days.

House Ways and Means Chairman Kevin Brady of Texas and other House Republicans are seeking to blunt the tariffs’ impact by adding an “exclusion process” allowing American companies to petition for duty-free access for imports that aren’t available from U.S. sources.

The lawmakers want existing contracts for aluminum and steel to be exempted from tariffs. They also called for a review of the effects of tariffs on the economy “to determine if a different approach would better serve the interests of our American workers, job creators, and consumers.”
Brady said he spoke with Trump twice last week but not since the Thursday meeting when the president unveiled his plans.

“The president has not made a final decision yet,” Brady said. “I’m continuing to reach out to the White House and the trade team.”

If Trump follows through with the tariffs he proposed, the Senate Finance Committee should consider holding hearings, said John Cornyn of Texas, the No. 2 Republican in the chamber.

“The part that concerns me the most is the potential for retaliatory tariffs and a so-called trade war and other areas that would affect some of the more vulnerable sectors of our economy, like agriculture, for example,” Cornyn said.

Senator Mike Lee, a Utah Republican, is going a step further by pushing a bill to limit the president’s ability to impose tariffs without approval from Congress. “In a government system with checks and balances, the president should not have the power to unilaterally levy or alter tariffs,” he said on Twitter Monday.

While Trump has regularly railed about China’s trade practices, the impact of the tariffs may be felt most by U.S. allies, the European Union, Canada and Mexico.

Trump wants to protect industries that are “the backbone of this country” and to “make sure we’re doing everything we can to protect American workers,” said White House spokeswoman Sarah Huckabee Sanders at a Monday briefing for reporters.

Trump has used the threat of tariffs in talks with Mexico and Canada on renegotiating the North American Free Trade Agreement.

Commerce Secretary Wilbur Ross recommended the tariffs after concluding that imports of steel and aluminum threaten the country’s national security. Until recently, the inquiry into the national security risks of steel and aluminum had been considered separate from the Nafta discussions. But Trump revived his complaints about Nafta being a “bad deal” for the U.S. in a tweet on Monday and linked the talks underway in Mexico to the tariffs.

Canada, the biggest supplier of steel and aluminum to the U.S., and Mexico, the No. 4 source of steel, have asked to be excluded from the tariffs.

On Monday, U.S. Trade Representative Robert Lighthizer said the U.S. has formally offered to exclude Canada and Mexico from the president’s planned tariffs on steel and aluminum if the three countries work out a deal on a new Nafta.

“The president’s view was that it makes sense that if we get a successful agreement, to have them be excluded,” Lighthizer told reporters in Mexico City following the seventh round of Nafta talks. “It’s an incentive to get a deal.” 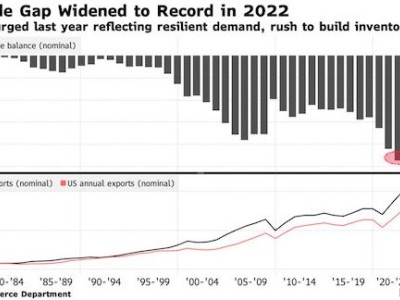