US Ag exports undermined by 2019 flooding and inland waterway closures

Catastrophic flooding in 2019 is slowing or stopping barge traffic along the Mississippi, Missouri and Arkansas rivers and adversely impacting farmers and exports.

Flood Impact to Waterways
An American Commercial Barge Line report dated June 10th says tug/barges accessing the following rivers and the Gulf of Mexico are encountering these challenges:
• Upper Mississippi River above St. Louis: “all locks are now closed due to high water”
• Illinois River is “Closed …. until 6/21-22”
• Gulf: “We continue to battle flood conditions, heavy delays…. Shuttle boats in the Gulf are reduced to 6-9 barges on Southbound moves due to the flooding conditions.”
• St. Louis: “harbor is closed from miles 179-184.”
• Memphis: “Daylight only through Memphis…. Vicksburg bridge and Baton Rouge.”
• Arkansas River: “Flooding and high flows on the Arkansas River. The river is expected to be closed until early July. Reports have come in that Lock 13 (AK 298) has sustained significant damage and is closed until further notice.”

Matt Pitsch, a consultant with the Fort Smith-based Western Arkansas Regional Intermodal Transportation Authority told AJOT that the Authority is working on locating a container terminal for tug/barges service to and from New Orleans. However, he noted: “barge traffic here in the Arkansas River will not open up for several months. …It has been raining here for days… I ‘ve never seen anything like it.”
Debra Calhoun, senior vice president for the Washington, DC-based Waterways Council, Inc. told AJOT that “there was a little good news over the weekend as the (Missouri) river from …Bellevue, Iowa…Muscatine, Iowa (100 miles of river) is opening up. It is still closed from below St. Louis up to Muscatine.”
Calhoun noted that:
The 7-day weather forecast isn’t looking good, “with 3-4 more inches of rain expected that could keep St Louis Harbor closed.”
The (Missouri) river had been falling from St. Paul to St. Louis with St. Louis cresting at 45.7 feet yesterday (June 10th).
The weather forecast of 3-4 inches of rain does not look favorable for the upper Mississippi River.
Illinois River navigation is now open down to Beardstown, IL, but full river operations will be suspended until the St Louis harbor opens.
The lower Mississippi is “back on the rise after weekend rains covered most of the Mississippi Delta region. There are still maximum tow size restrictions and daylight operating only in critical navigation areas.”
The U.S. Army Corps of Engineers is “going to have to dredge the rivers that were impacted by increased sediment from the flooding, so that will be a challenge going ahead.”
Impact to Farm States
Calhoun said that agricultural producers in states such as Nebraska, Iowa, Missouri, Illinois, Arkansas, are facing a “quadruple whammy” as they are adversely impacted by delays:
Inputs such as fertilizers that are shipped by barge up river have been delayed and this delays planting of crops such as soybeans and corn.
Flooding has delayed the planting of soybeans and corn.
Products that were harvested last year and should be moving southbound on the Mississippi to ports such as New Orleans for export “have been disrupted… There are thousands of barges waiting to go somewhere.” This means more goods will be transported by trucks on highways.
Lastly, “the Chinese tariffs on soybeans have been impacting farmers as well.”
Infrastructure Shortfalls
Calhoun said: “In a disaster like this year, you do see the importance of a resilient and reliable inland waterway system for shippers.” This year’s flooding and the damage to levees and locks represent a warning about the need to fast-track investments to upgrade the nation’s waterways to defense against future transportation dislocations that characterized 2019.
The Waterways Council continues to urge that the waterways be included in any infrastructure bill that Congress will consider, but as long as there is no agreement on the revenue source it remains: “pie in the sky.” Calhoun notes that transportation projects attract an increased emphasis on public/private partnerships which usually means tolls: “Well, you can put tolls on highways but if you assess tolls on every lock a tug/barge passing through, then you lose the lower cost advantage of shipping by water.”
The Council is urging the funding and completion of 25 lock and dam projects that will require $8.8 billion “which is a drop in the bucket compared to the billions required to fund upgrades to the highways.”

Calhoun notes that tug and barge operators pay a tax on diesel fuel consumption, which supplements the budget for the U.S. Army Corps of Engineers.
This has helped accelerate completion of projects such as the Olmstead lock and dam complex. The $3 billion lock and dam complex took 30 years to complete and composes two 1,200-foot locks and a 2,500-foot-long dam, which are located at the confluence of the Ohio, Tennessee, Cumberland and Mississippi rivers. The project was originally allocated $775 million in 1988.
Olmstead allows tug/barges to replace the equivalent of 25,000 semi-trucks passing through annually. Approximately 90 million tons of commodities have passed through the two locks and dams that Olmsted replaces including coal, grain, rock and sand, according to the U.S. Army Corps of Engineers (USACE), which estimates that one barge can displace 70 trucks. So, the savings in diesel fuel consumption and in investing in the inland water way system is significant. 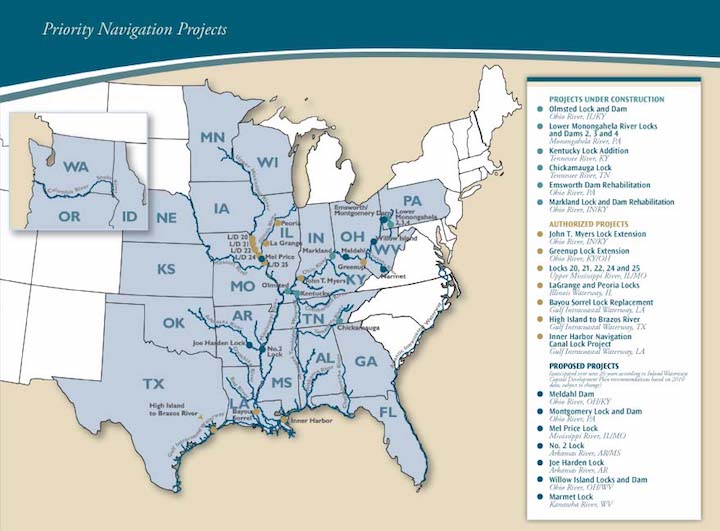