Sushi is a delicacy generally consisting of raw seafood or meat and rice. The unique evolution of sushi began in Japan around the fifteenth century and has continued to be a staple of Asian cuisine.

Held from 27 to 29 July, this made Tokyo Big Sight the ideal location for leaders in the industry to showcase their seafood products. 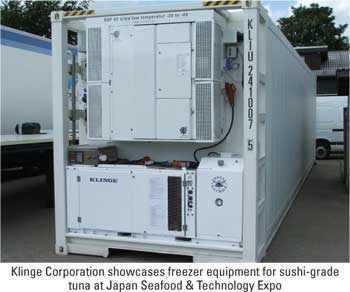 Klinge Corporation featured their Blast Freezer Model CBU-30 for the quick freezing of yellowfin tuna and other high-value seafood. Their picture frame style freezer is designed for freezing cargo to -60’C (-76’F). It is mounted to 20’ or 40’ ISO containers.

Henrik Klinge, President and CEO of Klinge Corporation, said: ‘More and more companies are using lower temperature freezing machinery to transport sushi-grade tuna. This is because blast freezing means substantially reduced transportation costs as the fish can be transported by container ship rather than air freighted.’

‘Our CBU-30 is also unique in that its evaporator fan draws air through the load to ensure even temperatures throughout the load. Many standard units are not equipped with an evaporator fan system designed to accommodate cargos with high-pressure drops,’ continued Mr. Klinge.

Without the special design, airflow would be reduced and the blast freezing process would take considerably longer.

Klinge Corporation also showcased their Stationary and Mobile Deep Freezer Model SDF-60 at the expo. Capable of being used in a room or in an ISO container, the freezer is designed to maintain cargo temperatures within 0’C to -60’C (32’F to -76’F).

Unlike other designs, Klinge Corp’s ultra-low temperature storage solution contains defrost heat in the evaporator section so that heat does not enter the flue. More standard designs allow heat from defrost to enter the container thereby heating up the container.

Containing the heat from the defrost process in the evaporator section also decreases the amount of time necessary to defrost the coil so that the interruption to the blast freezing time is shorter.

At the same time, there is also less residual defrost heat to remove after defrost meaning the unit can do what it is supposed to do and freeze the product instead of working to remove excess heat. Klinge Corp’s design therefore saves energy and maintains more consistent product temperature throughout the process.