The September index was revised to 135.0 from the 135.8 reported in last month’s release.  Monthly numbers for March through June were also revised down slightly.

The Freight TSI measures the month-to-month changes in for-hire freight shipments by mode of transportation in tons and ton-miles, which are combined into one index. The index measures the output of the for-hire freight transportation industry and consists of data from for-hire trucking, rail, inland waterways, pipelines, and air freight. The TSI is seasonally-adjusted to remove regular seasonal movement, which enables month-to-month comparisons.

Analysis: The Freight TSI increased 0.5% in October from September due to seasonally-adjusted increases in rail carloads, trucking, air freight, and water and decreases in pipeline and rail intermodal.

The October increase came in the context of mixed results for other indicators. The Federal Reserve Board Industrial Production (IP) Index grew 1.2% in October, reflecting increases of 1.2% in manufacturing, 4.1% in mining, and 1.2% in utilities. Housing starts were down 0.7%. Personal income increased by 0.5%.

The Institute for Supply Management Manufacturing (ISM) index was down 0.3 points to 60.8, indicating continued but slowing growth in manufacturing.

Although the October Passenger TSI is being withheld because of the previously cited difficulty of estimating airline passenger travel and other components, the September index is now being released. The index increased 1.9% from August to September following a decrease of 1.6% in July. Seasonally adjusted, air passenger and rail passenger grew while transit declined slightly. The Passenger TSI has now exceeded its level in March 2020 —the first month of the pandemic— for four months in a row but has not returned to its pre-pandemic February 2020 level. The Passenger TSI remains below its pre-pandemic level for the 19th consecutive month.

Trend: The October freight index increase was the second increase following four consecutive months of decline. This was the fourth increase in eight months for a net increase of 1.7% over the eight months since February 2021. The October Freight TSI is at the same level as March 2021 and is 8.4% above the pandemic low in April 2020. The index is 4.4% below its record level of 142.0 in August 2019 and has decreased in 14 of the 26 months since that peak.

Year to date: For-hire freight shipments measured by the index were up 0.6% in October compared to the end of 2020 (Table 3).

The TSI has three seasonally-adjusted indexes that measure changes from the monthly average of the base year of 2000. The three indexes are freight shipments, passenger travel and a combined measure that merges the freight and passenger indexes. See Seasonally-Adjusted Transportation Data for numbers for individual modes. TSI includes data from 2000 to the present. Release of the November 2021 index is scheduled for January 13, 2022.

Revisions: Monthly data has changed from previous releases due to the use of concurrent seasonal analysis, which results in seasonal analysis factors changing as each month’s data are added. 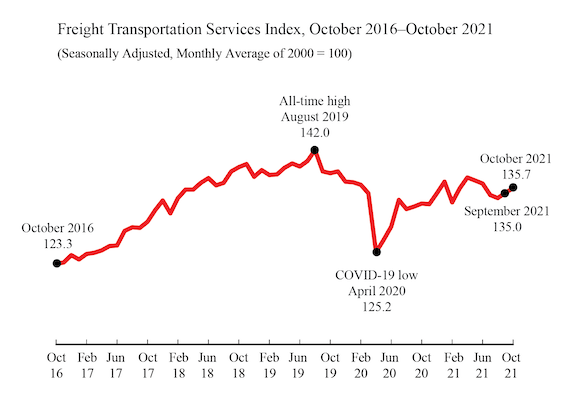 Britain’s rail network was snarled by another mass strike Friday, with the biggest train drivers’ union warning that more industrial action could be announced if talks next week don’t lead…

Happy Groundhog Day. Train drivers are striking, again; the Bank of England raised rates yesterday, again; and Emirates Telecom has raised its stake in Vodafone … again. So if it’s…

Total North American intermodal volume fell 3.9 percent in 2022 in contrast to the 3.6 percent expansion the industry enjoyed in 2021. Three of the past four years have seen…

The Association of American Railroads (AAR) today reported U.S. rail traffic for the week ending January 28, 2023, as well as volumes for January 2023.

Swathes of office staff will be forced to work from home Wednesday as widespread industrial action closes schools and cripples Britain’s rail network.