The traditional silver statuette of Christopher Columbus – the first Admiral of the Ocean Sea –was accepted by the three honorees at a before a record crowd of nearly 950 people at a gala dinner and dance October 28, 2022 at the Sheraton New York Times Square Hotel. The recipients shared the evening with a group of American seafarers who were honored for acts of bravery at sea.

LTG Kenneth R. Wykle, USA, (Ret.), Chairman, USS AOTOS Committee, and host or the evening, noted: “We honor tonight three extraordinary Americans who have made a positive impact on America’s maritime industry, which continues to offer up deserving AOTOS recipients and it is our honor to honor them.”

In acceptance remarks before an attentive and enthusiastic audience, each recipient offered the usual words of appreciation to family, friends, mentors and USS. They each also addressed issues concerning the logistics and supply chain industry.

Ed Aldridge said: “Everyone would agree that the maritime industry is under tremendous transformation. This means it is now more important than ever for us to take care of the industry by attracting new talent and mentoring the next generation of leaders—both on land and on sea.”

He continued, “This industry has been built on the vision and actions of bold, daring and fearless leaders who convey confidence, optimism and instill a sense of purpose. The time is now,” he said, “ for us as leaders to ignite a fire and get the message out about the maritime industry’s vital role in the supply chain and the many dynamic career opportunities that exist. We frankly need to inspire more of the next generation to join the family, and the future of the maritime industry depends on us getting it done.” He was presented with his award by Cliff Pyron of Georgia Ports.

Harold Daggett discussed the ILA’s negotiations with the USMX. “I believe we will come out with a great contract for six more years. We need to work together, and keep this maritime industry moving. We haven’t had a strike sine 1977,” he said. “We need to continue that, and we will.”

He also spoke about the industry’s A-word. “Automation - That’s a code word for unemployment. The ILA has pledged to USMX that we will outproduce any automated equipment. You may have read my position responding to reports that shipping companies were exploring automated ships. I have a simple message for you: If you plan to sail ships without crews, don’t bring them to an ILA port,” he said. ”We ain’t working them.”

“Our jobs are tough and dangerous. ILA longshore workers do their jobs in extreme heat and cold,” he said. Well, after 130 ILA years of hard work, blood, sweat and tears, that is not happening.” Anthony S. Scioscia, a lifelong friend, presented Mr. Daggett his AOTOS.

Eric Ebeling said: “The U.S.-flag fleet and merchant marine are dependent on smart and proper maritime legislation. Most of the nation’s most effective policy planks and enhancements have come in the wake of the nation’s wars.” He added: “The good news: the U.S.-flag fleet and the American merchant marine have always delivered, and we continue to do so.”

Ebeling said: “From the buildup, sustainment, surge and drawdowns in Afghanistan and Iraq, through the depths of Covid-19, and in Europe today in support of the U.S. and NATO mission supporting Ukraine, we deliver. The U.S.-flag commercial fleet in international trade remains a best value for reliable, cost-effective national defense sealift, providing an active modern fleet and thousands of good-paying jobs to merchant mariners that also support the reserve fleet in time of need and global sealift and logistics reach,” he said.

“Carriers continue to invest and we are all committed to rebuilding the mariner pool. But we need a whole-of-government, industry and labor effort with an expanded focus. It is right and proper that maritime policy efforts in recent decades have prioritized national defense. Most recently, the reauthorization of the Maritime Security Program provided longer term stability for carriers investing in 30-year assets by extending the program through 2035.” Eric Ebeling was presented his AOTOS by his father, Ray, who was a 2002 AOTOS recipient.

The officers and crew of four American vessels were honored for heroism at sea. (See separate press release)

Proceeds from the AOTOS event benefit USS community services abroad for the U.S. merchant marine, seafarers of all nations, and U.S. government and military overseas. Edward Morgan is President and Roger Korner is Executive Director of USS. AOTOS Coordinator is Barbara Spector Yeninas. 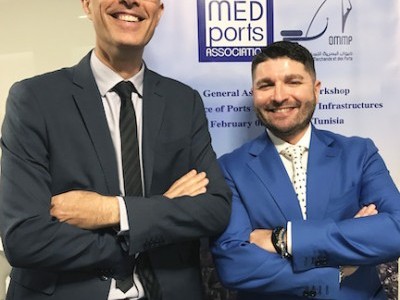