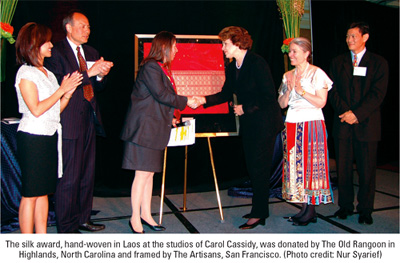 “The Rise of China is one of the most remarkable transformations the world has ever seen,” said US Senator Dianne Feinstein, accepting the California-Asia Business Council’s annual New Silk Road Award for her outstanding contributions to the development of US-Asia business on June 3 in San Francisco.

The award was presented at Cal-Asia’s 11th annual “Asia Night” dinner, held at the Ritz-Carlton Hotel.

In her acceptance remarks, Feinstein said, “The rise of China is one of the most remarkable transformations the world has ever seen.” She also expressed her opposition to a bill by Senators Schumer and Graham pending in Congress that would slap high tariffs on Chinese goods if China does not revalue the Yuan, saying, “While I believe China needs to take action, it must do so in a way that minimizes harm to its economy, and consequently avoids hurting the global economy as well.”

“For many of us who watch China, there is both a sense of awe at what China has accomplished, as well as a sense that it could all unravel overnight,” she commented, She noted that China remains vulnerable because of the unevenness of its development, income inequality, insufficient educational opportunities, ethnic strife, fluctuating capital markets, inadequate enforcement of its intellectual property laws, and growing conflict over a US deficit that could reach $200 billion this year.

“Rather than just pinning the blame on China, we need to better understand the costs that lead to outsourcing abroad and take action to remediate them,” she said in remarks prepared for the occasion. “I strongly believe that the US-China relationship is and will be America’s most important bilateral relationship. We must not let differences, economic or otherwise, derail the progress that has already been achieved over the past three decades.”

In presenting the award, Cal-Asia President Elizabeth Y. A. Ferguson, who also serves as managing director of the Bay Area Family of Funds, San Francisco, lauded Feinstein for her leading role in building trust and understanding between the United States and its Asian business and trading partners. “Most important,” she said, “you have worked to help ensure that the complexities of these relationships are well understood among policymakers—who can then make better informed decisions.”

She also noted Feinstein’s early success as Mayor of San Francisco in establishing sister-city relationships that have yielded business advantages for California companies in Asian markets, and her work in supporting China’s accession to the World Trade Organization (WTO) and normalization of trade relations with Vietnam.

“In short, Senator Feinstein,” she said, “your commitments to California-Asia commerce and to overall US-Asia business relationships have changed the way the United States interacts, trades and invests with its Asian trade and business partners, creating increased opportunities for US firms, and better ways for resolving disputes.”

China opposes US threat to impose sanctions on Ethiopia

China criticized a U.S. threat to impose sanctions on Ethiopia over a conflict in the Horn of Africa nation, saying the government has the ability to resolve its own issues…

Taiwan’s request to join the Asian-Pacific’s biggest working trade deal, coming just days after China’s submitted its own bid, presents the member nations with a difficult choice - admit one,…

Taiwan has submitted an application to join a Pacific trade deal, just days after China sent its own request to become a member of the agreement which was once pushed…